Welcome back NFL Fans! Week 11 of the 2022 season is behind us, and it’s time to calculate the NFL Predictions for Week 12. @TheBrysh Power Rankings (PR’s) are calculated using a proprietary algorithm, @TheBrysh Power Rankings are also used to calculate weekly predictions. Week 11 predictions for @TheBrysh were an impressive 11/14, for a season total of 92/163 or 56% on straight up wins. As the weeks progress, the numbers get dialed in and the predictions become even more accurate. Point spreads are courtesy of wannamakeabet.com and are accurate at the time of writing. 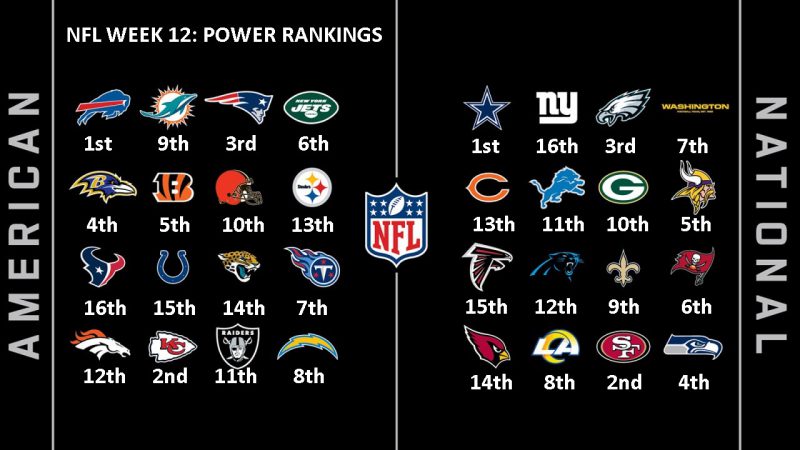 Buffalo Bills(-9.5) @ Detroit Lions The Lions are coming off of a big win against the Giants last week, bringing their streak to 3 in a row. Unfortunately, the streak ends when Detroit hosts the Bills with their explosive offense lead by RB’s Devin Singletary and James Cook. The Lions will end up being “Turkeys” when they lose to the Bills 33-23.

NY Giants @ Dallas Cowboys(-10) @TheBrysh has rated the Cowboys as 1st in the NFC most of this season, much to the chagrin of Eagles fans. Dallas is on a roll, and will continue when they meet the Giants this week. New York is injury-riddled and can’t compete against the Thanksgiving Day staple that is the Cowboys, take Dallas to win easily 38-17.

New England Patriots @ Minnesota Vikings(-2.5) HC Bill Belichick’s record against the Vikings is supreme, and he has never lost to a Kirk Cousin’s offense. Minnesota showed their own vulnerability in a 40-3 blowout to the Cowboys last week. @TheBrysh is speculating on an UPSET 29-26 win for the Patriots.

Tampa Bay Buccaneers(-3.5) @ Cleveland Browns This is the final week before Cleveland welcomes back disgraced QB Deshaun Watson to the team. Buc’s QB Tom Brady is in the zone lately, he will have a challenge with the Browns but should squeak out a close 22-21 victory.

Cincinnati Bengals(-2) @ Tennessee Titans This is a repeat of last year’s divisional playoff game where Cincy pulled off a 19-16 win. This year the Titans have a better record than the Bengals (7-3 to 6-4) but the odds are shifting towards Cincinnati. @TheBrysh spies an UPSET with the Titans winning 30-26.

Houston Texans @ Miami Dolphins(-13.5) The Texans are by far the worst team in the entire NFL, and won’t let a win get in the way of the Number 1 Draft Pick. A week of rest, and a hot offense led by WR Jaylen Waddle will see the Dolphins to an easy 32-18 victory over Houston.

Chicago Bears @ NY Jets(-4.5) Jets QB Zach Wilson is finally getting benched after a horrible showing last week where he managed only 9/22 passes for 77 yards. Even with a backup quarterback, the Jets should have little problem racking up points against the paltry defense of ‘Da Bears. Take the Jets 39-28.

Atlanta Falcons @ Washington Commanders(-4) The betting lines have been shifting towards the Commanders, @TheBrysh agrees and endorses a Washington victory over the Falcons. Atlanta’s offense has been improving, but Washington’s defense has been holding opponents under 21 points. Commanders should win it 34-26.

Denver Broncos(-2.5) @ Carolina Panthers The Broncos are favored in this game against the Panthers, even though QB Russell Wilson is obviously not “jelling” in Denver. Carolina is floundering as badly as Denver, but showed potential holding the Ravens to 13 points. @TheBrysh is going out on a limb and predicting an UPSET, Panthers 21-18 over the Broncos.

Baltimore Ravens(-4) @ Jacksonville Jaguars As a straight up win, the Ravens against the Jag’s is a “no-brainer”. Baltimore has won 4 games in a row, while Jacksonville have lost 6 of 7 games. Baltimore was humbled by their poor performance against Carolina, but will come through with a 34-30 victory.

Las Vegas Raiders @ Seattle Seahawks(-4) Raiders vs Seahawks brings back memories of Bo Jackson vs Brian Bosworth, but that was 35 years ago. The OVERRATED Raiders do not have an answer for a Seattle offense that averages almost 26 points per game, take the Seahawks 32-24.

LA Rams @ Kansas City Chiefs(-15) This is the largest spread of the season, as the Chiefs host the disappointing LA Rams Sunday night. Even with QB Cooper Kupp, the Rams would have a tough time with the Chiefs. Without Kupp, the Chiefs should have a heyday in a 33-18 win.

New Orleans Saints @ San Francisco 49’ers(-9.5) Saints QB Andy Dalton looked like his “old self” last week, but don’t count on a repeat. The San Francisco 49ers are coming off of a bye week, and will be ready for a fight. I’m looking for a big win, so take the ‘Niners to win it 30-18.

Green Bay Packers @ Philadelphia Eagles(-6.5) I had to “double check” the point-spread on this game, -6.5 seems a bit “light” for the Eagles at home. Even though they aren’t looking like the 8-0 wrecking machine of a few weeks ago, Philly should have no trouble dispatching Green Bay 30-19.

Pittsburgh Steelers @ Indianapolis Colts(-2.5) Although Pittsburgh has shown some signs of life, this game has the optics of a big let-down for Monday Night. This one game that I don’t have any real interest in watching, so I’ll go with the home team Colts 22-20 over the visiting Steelers.