Welcome back NFL Fans! Week 10 of the 2022 season is behind us, and it’s time to recalculate the NFL Power Rankings for Week 11. @TheBrysh Power Rankings (PR’s) are calculated using a proprietary algorithm, each week the PR calculations will be represented in a 1-16 rating for each Conference. @TheBrysh Power Rankings are also used to calculate weekly predictions, which will be published as well. Week 10 predictions for @TheBrysh were an atrocious 4/14, for a season total of 81/149 or 54% on straight up wins. As the weeks progress, the numbers get dialed in and the predictions become even more dependable.  As a recap, here’s how we performed in Week 10: 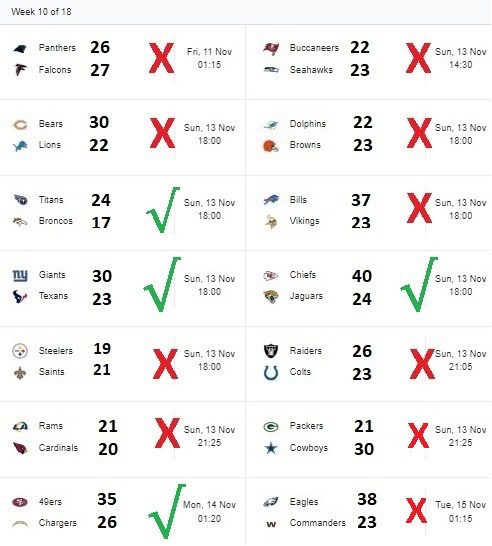 The Carolina Panthers hosted the Falcons hoping to even up their series at 1-1 after a loss in Atlanta. Panthers RB D’Onta Foreman racked up 130 yards on the ground to contribute to his teams total 232 yards rushing. With control of ball possession and a sturdy defense, Carolina cruised to a 25-15 point win and climbed to 13th in NFC PR’s.

Allianz Arena in Munich, Germany was the site for a showdown between the Seattle Seahawks and the Tampa Bay Buccaneers. Note to self, “throwing a trick play pass to QB Tom Brady lined up as a wide receiver is not a great idea”! Even with the blunder play call, the Buc’s came out on top 21-16 and remain at 6th.

The most anticipated game of Week 10 had to be the Buffalo Bills hosting Minnesota; the traveling Vike’s have looked pretty tough the last weeks. Trailing by 17 points, the Vikings pushed the Bills to a 30-30 overtime and came out with the winning field goal. The Buffalo Bills are still the best roster in the NFL and the Vikings are now 2nd in the NFC.

When a quarterback runs for 147 yards and 2 TD’s you guarantee a victory…right? Not when your team is the Chicago Bears and you are hosting the 2-6 Detroit Lions, my heart goes out to QB Justin Fields. The Lions turned around a 14 point deficit to win 31-30, they remain in 16th but managed to drag Da’ Bears to 14th in NFC PR’s.

The Miami Dolphins offense is definitely “for real” this year, as long as stars like QB Tua Tagovailoa can stay healthy. Tagovailoa contributed 285 yards passing to the teams 450+ yards offense, which lead to a Dolphins 39-17 trouncing of the visiting Cleveland Browns. Miami climbed 3 points to 10th, while the Browns dropped to 11th in AFC PR’s. 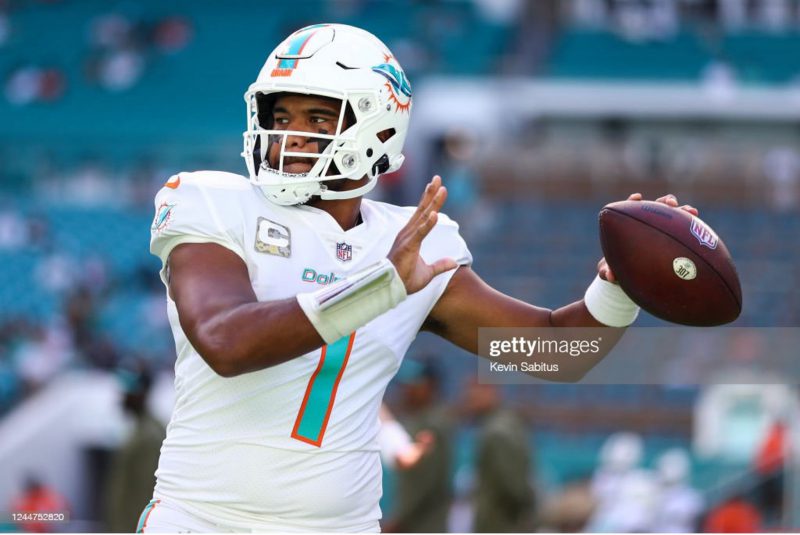 MIAMI GARDENS, FL – NOVEMBER 13: Tua Tagovailoa #1 of the Miami Dolphins warms up prior to an NFL football game against the Cleveland Browns at Hard Rock Stadium on November 13, 2022 in Miami Gardens, Florida. (Photo by Kevin Sabitus/Getty Images)

The Broncos can’t seem to find a groove with QB Russell Wilson, maybe because of questionable pass blocking, where Wilson was sacked 6 times and hurried repeatedly by the Titans. The standout player was Tennessee WR Nick Westbrook-Ikhine with 2 TD catches.

@TheBrysh was projecting a massacre when the Chiefs hosted the Jaguars; it turned out to be a competitive and entertaining. QB Patrick Mahomes lit it up with 331 yards and 4 TD’s passing, to seal a victory 27-17. The low point, Chiefs WR JuJu Smith-Schuster was taken out of the game by a questionable hit, the Jag’s drop to 13th.

The New Orleans Saints travelled to Pittsburgh in search of their 4th win of the season, but ran into a stingy defense and a dominant run game from the Steelers. Pittsburgh has been a disappointment to many fans in 2022, but displayed the potential of a team strong on both sides of the ball with a 20-10 win. Steelers move up to 12th in the AFC, Saints drop to 12th in the NFC. 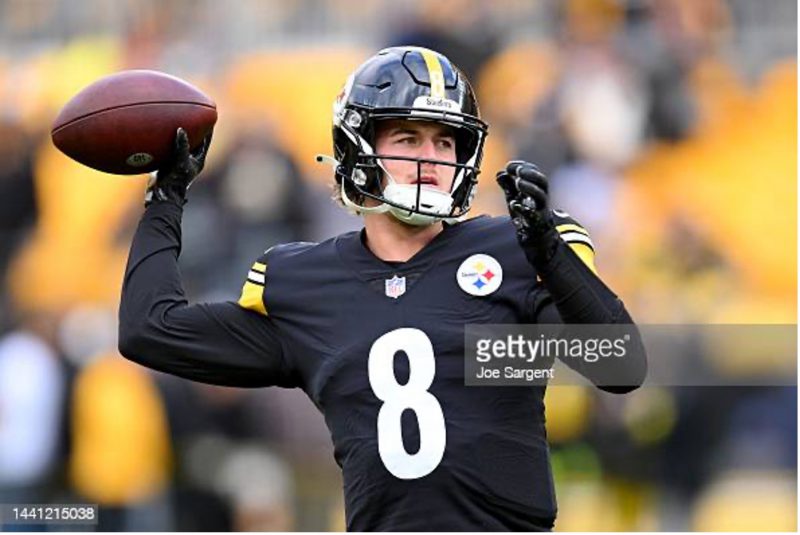 PITTSBURGH, PENNSYLVANIA – NOVEMBER 13: Kenny Pickett #8 of the Pittsburgh Steelers warms up prior to the against the New Orleans Saints at Acrisure Stadium on November 13, 2022 in Pittsburgh, Pennsylvania. (Photo by Joe Sargent/Getty Images)

It’s no big surprise, but the Las Vegas Raiders are vastly overrated as they lost yet another game, this time to the lowly Indianapolis Colts. The Raiders only managed 77 yards rushing, compared to the Colts 207 yards, 147 were contributed by RB Jonathan Taylor. Indy cruised to a 25-20 victory but remain at 15th, Raiders drop to 14th in the AFC PR’s.

The Cowboys did not bring their “A Game” when they arrived at Lambeau Stadium to take on the 3-6 Packers. The Dallas defense was absent as Packers RB’s Aaron Jones and AJ Dillon ran for 203 yards and QB Aaron Rodgers tossed 3 TD’s. The Pack’ snuck in a 3 point win to rise to 9th, the outcome of Monday Night Football allowed Dallas to keep 1st in the PR’s.

When two teams meet up relying on backup QB’s, fan interest drops and the outcome is pretty much a toss-up. The Card’s find a pleasant surprise with QB Colt McCoy’s performance, while the Rams find disappointment in QB John Wolford’s 21.3 QB Rating. Arizona meandered past LA 27-17 to take 7th; the Rams fall to 8th in the NFC.

The Sunday night game was not kind to the LA Chargers offence, the 49’ers held them under 200 yards passing and only 51 yards rushing. Niner’s LB Dre Greenlaw was ejected in the 1st half for a helmet-to-helmet hit on Chargers QB Justin Herbert. Despite Greenlaw’s absence, 49’ers pulled off the win over the Chargers 22-16.

It was supposed to be a “walk in the park”, but the Commanders were a disaster for the unbeaten Philadelphia Eagles. Neither team was impressive, but Washington exploited the sloppy Eagles and their 3 fumbles and an interception. Washington took the “W” 32-21 and moved up 5 spots to 15th, the Eagles fall to 3rd in the NFC.